Is it possible to slope (Grade) a terrain level?

winirek Posts: 2
May 2020 in Elevation Data
I've been tasked with re-creating a landscape in digital form that was removed from the environment (Think, dismantled railways, trackbed's and removed embankments. on a post industrial landscape) 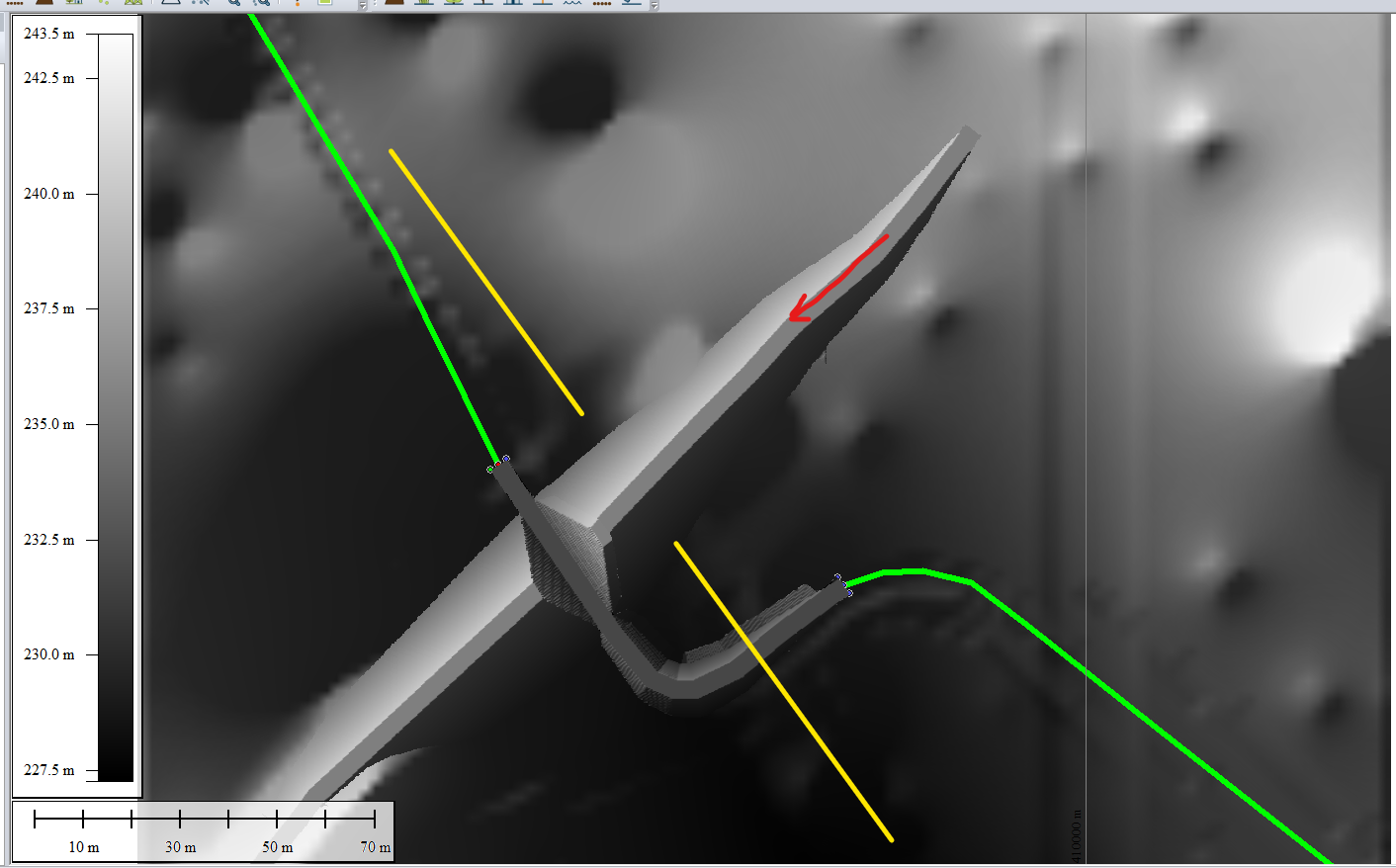 The above image gives an example of what I'm on about.
In history, there was 2 main railway lines crossing each other at this location, an east to west railway (Shown by the red arrow) that sat at the very top of the embankment (240m above sea level)with a small narrow road bridge going under it at 234m (the road is the green line)
Underneath the Road and upper railway line was a second railway line traveling south to north at about 228 meters (At the point it goes under the higher embankment it was in a tunnel approx 20 meters long but the road went over a small brick bridge (Bridge deck at 234 meters)
The flat level bits are fine, I have no problems with that, but the entry and exit roads come down hill, under the bridge, round and over the second bridge, the curve back up hill to the south.
Starting with the first road (in green) the top (North Tip) is at about 236 meters, it's bottom where it meets the gap I've already cut for the bridge is at 234 meters, like wise the exit road starts at 234 Meters and rises up to about 240 meters as it goes up the valley side.
Now, I can calculate the cut and fill for these road segments, using the cut and fill measurement tool, and that allows me to plug in the heights along the length of the line, and even calculate and tell me how much to remove, how much to add with the ends appearing to form a steady gradient.
What I can't figure out, is how to apply that gradient to the flattened plane I'm creating so that the ends of the line are at different heights, and GM cut's and fills as needed where it cuts through the undulations of the terrain just as it does when doing a level.
I've tried the find optimal heights calc, but that still gives me a level platform, and the relative to ground height doesn't seem to work the way I think it does.
I've been messing around for days now, and even watched most of the videos on the blue marble geo youtube channel, can anyone tell me how to cut a roadway, with a gradient through a terrain, and have the cut/fill calculated for me?
Many thanks in advance for any help anyone can give.
PS: For those who are curious, it's an area in Northern England that used to be heavily industrial back in the 1960/70/80s I've been asked by the local history society to try and rebuild the landscape that was since "landscaped" and made into a country park so they can do some digital models of what it used to look like.  once the landscapes are done, the old factory buildings will be rebuilt based on 2D digitizing from old maps of the era, then everything will be ported into the unity game engine to create an app allowing visitors to the history exhibition to walk around the landscape as it used to be.
Tagged:
terrain_stuff.png 357.6K
Sign In or Register to comment.