Here is a map of a particular reef in Manifold: 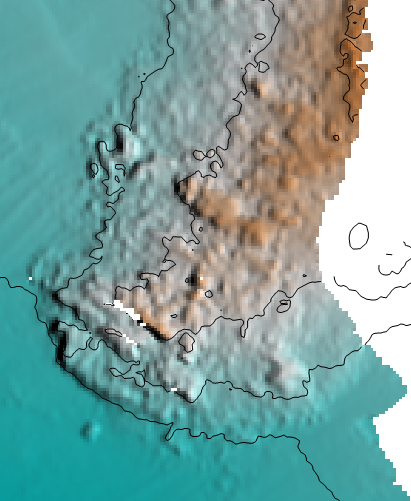 And here is the same approximate area mapped using the same bathy data in GM13:

I'd like to generally lighten up the image to get closer of the appearance of the map I created previously. First, it seems as though the slope shading is quite a bit darker in GM. I've tried various of the shaders on the drop-down menu, but they all seem to produce an effect darker (or different) from the slope shading I previously used. Can you give me any help on how to set up shading to get closer to the visual appearance of the chart I previously made?

Second, it's been quite a while since I've worked with Manifold, but the color hues assigned to various depth ranges appear to vary in intensity (or saturation?) based on specific depth. In the shallow areas, the brown/orange color blends progressively from a lighter or more pastel color to a stronger hue. Can the same kind of effect be created in GM?